One of my latest obsessions is building DIY homebrew WiFi antennas.

This is the first antenna I built. It's the ubiquitous circular waveguide "cantenna": 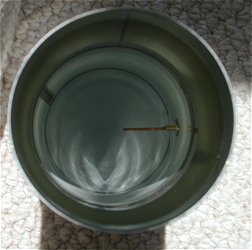 I obtained my can by going to my local 99 Cents Only store and buying a can of Heinz beans, which happened to be desired 3.25" diameter. The resultant methane gas produced from consuming the beans was used to power my soldering iron afterwards.

I will not go into the construction details, as they are very well documented on Greg Rehm's site. Finding his online cantenna calculator rather intriguing, I set out to find the mathematical roots to his calculations. The result is my own cantenna calculator program, which I wrote in in C++, based on formulae obtained from the ARRL Antenna Book. It's available on my free software page; the archive contains both a Win32 console-mode EXE and full source code. In addition, Adam Lesser has kindly supplied a binary for OS-X.

Greg Rehm's calculator fixes the operating frequency at Channel 6 (2437MHz), which is the center channel in the USA, giving the best tradeoff if you want to build a general purpose antenna which works across Channels 1-11. On the other hand, my calculator lets you tune your antenna for maximum gain on a specific channel; this is handy if you want to use your antenna set up a permanent point to point link. Let's go through an example using my calculator. The syntax of the program is

where diameter is in mm. So to make an antenna optimized for Channel 6 using my 3.25" (82.55mm) diameter can, we would invoke it as follows:

So what's the meaning of all this gibberish?  The probe should be 30.8mm (1.21") long, and should be set 63mm (2.5") from the inside of the back lid of the can.  The operating wavelength of 4.8" shows us that we don't have to worry that the sides of the can have ridges, because the their depth is insignificant compared to the wavelength our signal. The Guide Wavelength is the wavelength of our waveguide. The TE11/TM01 Cutoff frequencies give us the approximate upper/lower frequencies of operation for our antenna. Since Channel 1 is centered at 2412MHz and Channel 11 is centered at 2462 MHz, we have a comfortable margin. Now the interesting part is that if you wanted to tune the waveguide for the center frequency of Channel 1, you would use a probe distance of 66.04mm instead, and for Channel 11, you would use 58.52mm. What this means is that there is a whopping 5.48mm difference in the optimal probe distance between Channels 1 and 11, so if you are going to use the antenna on a fixed channel, it's better to enter than channel number instead when running the program.

Experimenting with my calculator program, I've found some interesting information. As the waveguide diameter increases, the difference in optimal position for the driven element between Channels 1-11 drops.  I tried upping the diameter iteratively until the TM01 cutoff frequency started to go too low to do Channel 11. From my studies, it seems that about 92mm is the optimal diameter for the waveguide if you want to try to optimize it for flattest response across Channels 1-11; this is because it minimizes the difference in the probe position between Channels 1-11 -> about 2.63mm, so the SWR curve across the WiFi band is flatter.

Contrary to popular belief on the Internet, a can length of 3/4 the waveguide wavelength is not optimal. The ARRL Antenna book recommends 2-3 waveguide wavelengths instead. I've found that adding more cans indeed increases the gain. A 4-can one is the longest I tried; I didn't write down the gain testing results, but it was considerably better than the 1-can antenna. Adding more cans helps launch the standing waves in the can better. bmoore314 has some excellent info in this Netstumbler.com thread, including info about adding a conical collector to it.  My results from experimenting with a conical collector are documented in the section about my Bazooka Cantenna.

This is my first attempt at designing something myself. I downloaded the EZNEC demo from www.eznec.com and started fiddling with it. I still don't have a good grasp of how to model a real ground plane, but i was able to get some plots and start tweaking things.

I started w/ a quarter wave whip. In the US, Channel 6 is the middle channel at 2.437GHz. This makes a quarter wavelength about 30.6mm, so I started with this and just experimented w/ various lengths to change the pattern and SWR and ended up with 89mm. EZNEC shows SWR of 1.2-1.6 over the WiFi band and gain of 4.35dB max assuming a perfect ground (which we don't have). Below are plots of my EZNEC model:

Here is my prototype: 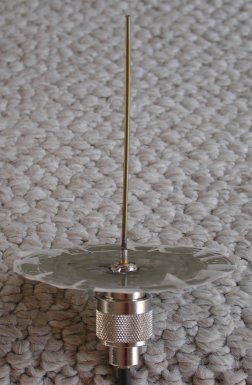 It's just a piece of 2mm dia. coat hanger cut to 87mm and soldered into an N-female panel jack for 89mm length from the tip to the base of the middle pin on the jack. Just for the hell of it I soldered on the ground plane, which is the lid of a 3.25" dia. tin can. The tape is just to keep me from shredding my fingers on the sharp edges. How well does it work? I was amazed. walking outside with MiniStumbler, i can find my AP 120ft farther away than with the ORiNOCO built in antenna. Inside the house, I went the the place w/ the worst reception and the signal & SNR went up by over 10dB vs the built in antenna. I haven't even begun to tweak the thing yet. not bad for a $4 antenna (the cost of the N jack).

This antenna has a page of its own. 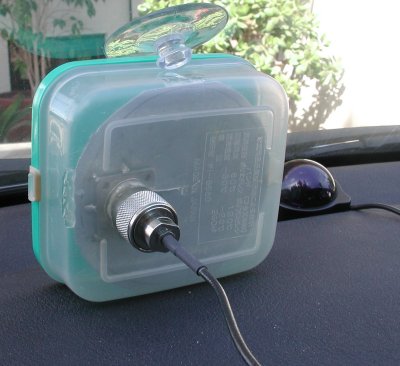 The Mobile Mark 5dBi antenna is the stumbling antenna of choice used by many Netstumblers. outcast_one was kind enough to post some pictures on the Netstumber.com website which were clear enough to get measurements from. Hope he doesn't mind my re-posting them here: 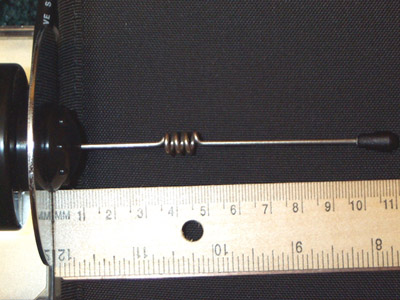 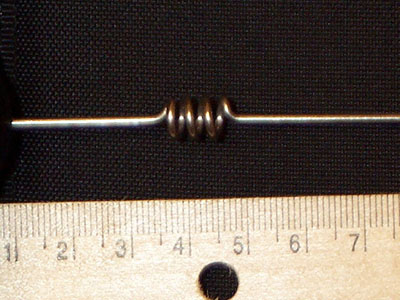 From the above photos, I estimated the dimensions below:
Here is my implemenation alongside my toothpick for comparison: 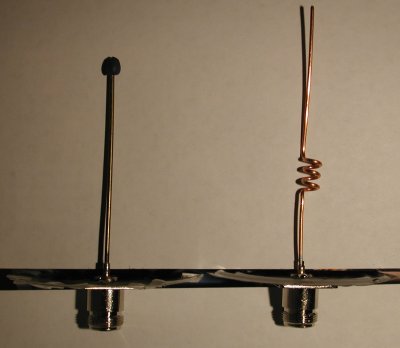 I used solid copper wire cut out of a piece of Romex...I forget the gauge..it was all I had available; tried initially to bend a coat hanger but the steel wire was too difficult to bend into the coils. Once again I used a 3.25" can lid as the ground plane; this is close enough to Mobile Mark's specified 3" ground plane. A nicer implementation would be to use a discarded hard disk platter (kudos to sparafina for that idea). I am worried that the copper is too soft to stand up to high winds when attached to my car. When I get a chance I will either encase the whole whip on a plastic tube or just support the coil by inserting a suitable piece of plastic into it. Another idea is to just fill the coil with hot glue.

My initial tests were not that promising...the gain was about the same as my toothpick, except that the antenna seemed less sensitive to polarization. However, stumbling with the antenna has shown that on the average, I pick up AP's 1-2 car lengths farther away than with the toothpick, and the SNR is often a little higher. Therefore, this antenna is used in my current stumbling rig.

Trevor Marshall has posted plans, as well as NEC2 models for his biquad dish feed. The antenna can also be used standalone. 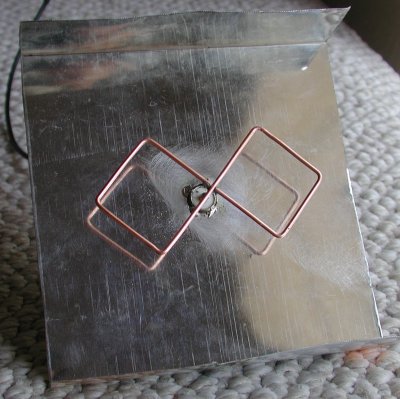 I fashioned the reflector from a discarded tin can. The reflector is 123x123mm, with 30mm "lips" as specified by Trevor for standalone use. The driven element is composed of copper wire I got out of a piece of Romex, with 30.5mm legs, and is suspended 15mm above the reflector. The antenna as pictured above was a complete failure and had horrible performance. Trevor explained to me via e-mail that I messed up the feed (the photos on Trevor's site are grainy). Here is my revised feed: 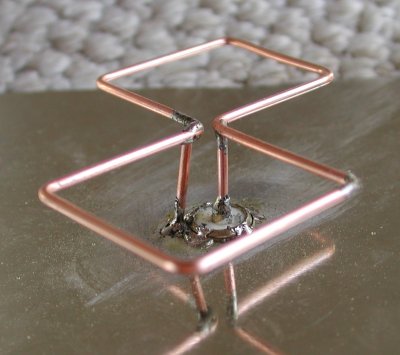 Instead of rigid coax as specified by Trevor, I just used some more copper wire for the connections; I'm not sure how this affects VSWR, but the antenna gave me about 3dB more gain than my Comtelco patch clone during my initial tests.

I've been trying to hook up my brother, who is a professor at a local college to his campus network. He lives just on the edge of campus, and although the IT Dept. has discussed putting an AP on his side of the street, no progress has been made for several months. Therefore, I decided to take matters into my own hands. There are tons of AP's just around the corner and out of LOS from my bro's house, but his block is strangely completely devoid of any signal.

Finally, one day I climbed up on his roof to see if I could get LOS and a signal from a yagi on a hill which was pointed away from my brother's house. I used my ORiNOCO card in my Jornada, pointed my biquad through a tree, and amazingly got a 5dB SNR! Now we were in business, but the 5dB seemed a little too weak for reliable communications, especially with the chance of the tree growing denser foliage.

I decided a cantenna might be the way to go, so I built a new one using 3 3.25" diameter cans...this makes the total length about 1.75 waveguide wavelengths. The driven element is 30.75mm long and mounted the 64mm from the back of the can. The conical collector is 7.25" in diameter on the big side, w/ a 30degree flare. This was just a quick prototype so I made the collector out of 2 coat-hanger circles, separated w/ four 4" long coat hanger supports covered in aluminum foil. the final design will need to be more durable to stand up against wind & hail. Here is what it looks like:

Before trying it on the target site, I did some testing with my AP at home. Here are the SNR's I got across the street from my AP:

This is the highest gain antenna I've built yet. In my excitement, I dragged my Jornada off a table while connected to this %$* thing and it fell on the floor. Lucky the card & Jornada are ok, but I broke off the end of my pigtail.

The next morning, I climbed on my bro's roof armed w/ the bazooka cantenna. Going back to the same place I got the 5dB SNR w/ the biquad, the bazooka got 8dB. I fired up PocketIE on the Jornada, and was able to surf a little - paydirt! Since it was daylight this time, I was able to try out more places on the roof, and finally found one clear of the tree which yielded 12dB SNR. Now we're in business; I've got a little more margin to play with so when I hook up the long LMR-400 cable to get the signal inside the house I won't get killed by attenuation.

To be continued after I get the rest of the equipment to complete the setup...

In the meantime, I played with the bazooka from the deck of my hillside house, and was astonished to find that it picked up an AP I'd detected while stumbling on the freeway in my car (using my Mobile Mark clone on the dash). Plugging the GPS coordinates in from the freeway into Microsoft Streets & Trips, it turns out the AP is about 4 miles away! Using the bazooka on at my house, the SNR was 8dB (signal ~-88dBm). As a comparison, I also tried the biquad. Using the biquad, the signal is unstable w/ max 4dB SNR, and it catches the AP for only a second at time.

This antenna has a page of its own.